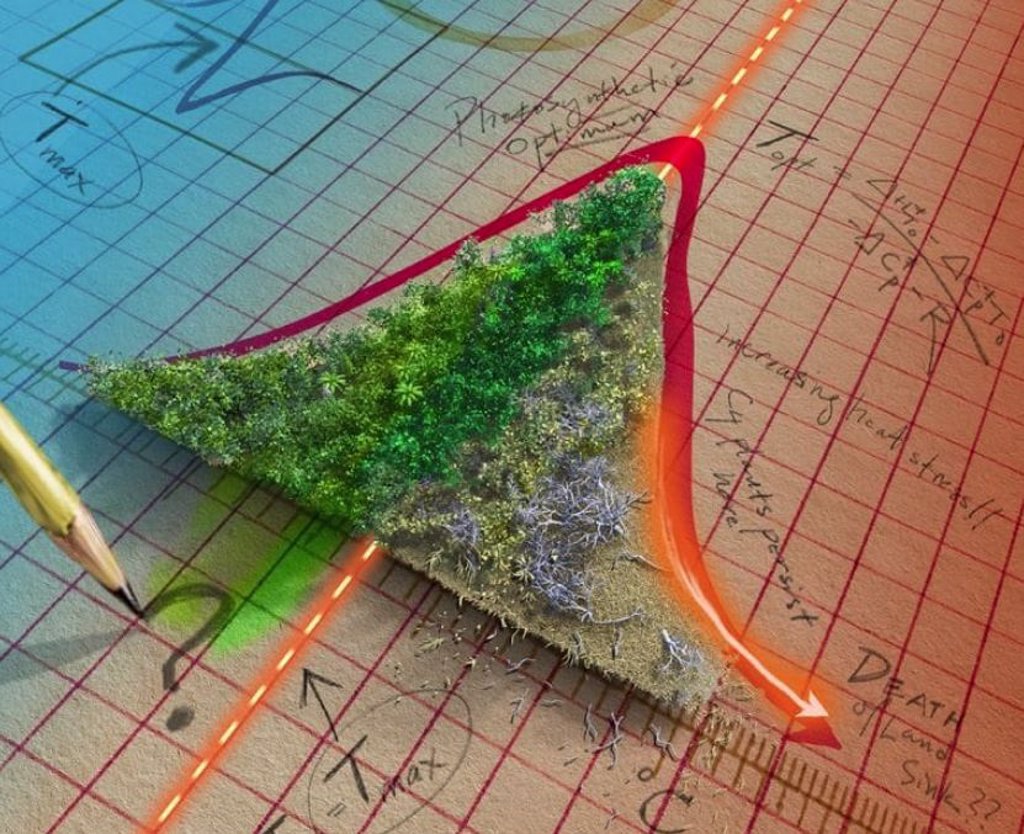 The ability of plants to absorb one third of CO2 emissions of human origin through the plants can be reduced by half in two decades at the current rate of warming.

Using more than two decades of data from tower measurement in all biomes important in the world, a team of scientists has identified a critical point of inflection of the temperature beyond which the ability of plants to capture and store atmospheric carbon, a cumulative effect known as the “sink of terrestrial carbon” decreases as the temperatures continue to rise. The findings are published in Science Advances.

The earth’s biosphere –the activity of land plants and the soil microbes– conducts a large part of the “breathing” of the Earth, exchanging carbon dioxide and oxygen. Ecosystems around the world to extract carbon dioxide through photosynthesis and release it to the atmosphere through the respiration of plants and microbes. During the last decades, the biosphere has generally absorbed more carbon than has been released, the thing that mitigates climate change.

But as record temperatures continue to expand across the world, it is possible that this does not continue; The researchers from NAU (North Arizona University), Centre for Climate Research Woodwell, and the University of Waikato have been detected to a threshold temperature beyond which the absorption of carbon by plants slows down, and the release of carbon is accelerated.

The lead author, Katharyn Duffy, a postdoctoral researcher at NAU, he noticed the strong decreases in photosynthesis over this temperature threshold in almost all the biomes of the world, even after removing other effects like the water and the sunlight.

“The Earth has a fever, constant growth, and, like the human body, we know that each biological process has a temperature range in which it performs in an optimum way and above which the function deteriorates,” said Duffy in a press release. “Then, we wanted to ask, how much can support the plants?”

This study is the first to detect a temperature threshold for photosynthesis from observation data on a global scale. Although the thresholds of temperature for the photosynthesis and the respiration have been studied in the laboratory, the data from Fluxnet provide a window into what the Earth’s ecosystems are experiencing really are and how they are responding.

“We know that the optimal temperature for humans is about 37 degrees Celsius, but we in the scientific community we didn’t know what were those optimal for the terrestrial biosphere”, Duffy said.

Teamed with researchers from Woodwell Climate and the University of Waikato, who have recently developed a new approach for the answer to this question: the Theory of the rate of macroMolecular (MMRT). With its base in the principles of thermodynamics, MMRT enabled the researchers to generate temperature curves for each biome and important to the world.

The results were alarming. The researchers found that the “spikes” of temperature to carbon absorption –18 degrees C for C3 plants more widespread and 28 degrees C for C4 plants– already are overcoming in the nature, but saw no temperature control of the breathing. This means that in many biomes, the continued heating will cause the photosynthesis decreases while respiration rates increase exponentially, tipping the balance of ecosystems from a carbon sink to source of carbon and accelerating climate change.

“The different types of plants vary in the details of their temperature responses, but all show declines in photosynthesis when it is too hot”, he said the co-author of NAU, George Koch.

At this time, less than 10 percent of the earth’s biosphere is experiencing temperatures beyond this maximum photosynthetic. But at the current rate of emissions, up to half of the earth’s biosphere could experience temperatures beyond that threshold of productivity for the mid-century, and some of the biomes most carbon-rich of the world, including the rainforests of the Amazon and southeast asia, and the Taiga in Russia and Canada, be the first to reach that tipping point.

“The most surprising thing that showed our analysis is that the optimum temperature for photosynthesis in all ecosystems was very low,” said Vic Arcus, a biologist at the University of Waikato and co-author of the study. “Combined with the increase of the respiration rate of the ecosystem through the temperatures that we observed, our findings suggest that any increase in temperature above 18 degrees C is potentially damaging to the carbon sink on land. Without curbing the warming to stay at or below the levels established in the agreement of the climate of Paris, the carbon sink of the Earth will not continue offsetting our emissions, and do not give us time“.