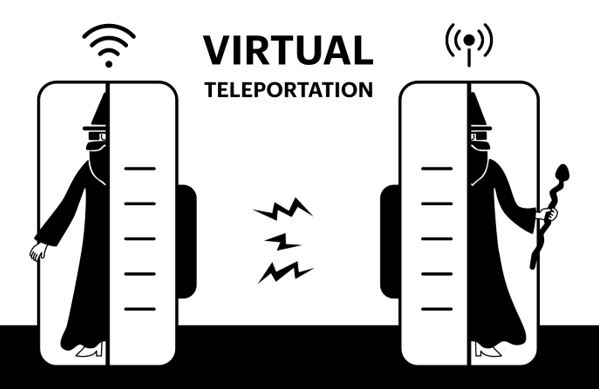 Tiluf’s main-net launched on 19th September 2021, and the app is available for both, Android and iOS. Since the past few months, Tiluf has been giving hints about the launch of their dream project – project Virtual Teleportation. Recently, one of their official tweets (@tiluf_) has assured us that it is ready, and is currently undergoing internal and community testing.

Virtual Teleportation is going to be a peer-to-peer social connection technology in the mixed reality space, where users can connect and interact with others through mixed reality channels. These connections have been termed as “Realities”. A reality is essentially a video stream in AR, VR, or XR, which contains both – virtual 3D objects and real objects together.

Users can host their own realities through the app. Others can join in as 3D characters, roam around, talk to each other, and interact with the environment. This virtual joining into a reality has been termed as ‘virtually teleporting’ in Tiluf.

“What are the limits of your imagination? A round table discussion between Ironman, Harry Potter, and Joe Biden at the top of Everest? Or maybe, inside your room? This is what we offer through Virtual Teleportation! Imagination is the limit here.” says Yash Shukla, Founder of Tiluf, “And everything you get through Tiluf is completely decentralized. We run our own application specific blockchain network. Unlike some other VR projects, which are using closed source game engines, our whole infrastructure is based on decentralized logic. Complete decentralization is our core principle, and we will not stop developing until we make a fully functional decentralized mixed reality engine.”

Much more amusing and interactive than a normal video chat room, Virtual Teleportation seems to unlock futuristic aspects of how people will interact with each other when video calls might become too constrictive and primitive. Another interesting part is how this project unlocks various aspects of decentralized gaming, socialization, and economy in the field of mixed reality technology.

According to Tiluf’s timeline, which gives a glimpse of their future vision and work, this is going to offer a perfect ecosystem for users to earn crypto coins and create value for their 3D characters (Curios). Their future plan includes robotics for virtual teleportation, De-fi integration, decentralized governance, and so many other things – all of which seem worth waiting for.

With Tiluf’s main-net up, they will soon be introducing a crypto faucet for early coin distribution. It would mean free coins and other perks for the early believers. The faucet will soon be available on their discord and subreddit communities.

With the constant flow of new releases, and another major launch coming soon, it seems that Tiluf is taking up its place as a pioneer in the decentralized and the mixed reality spaces. Following along on their journey, as they map out their future, will definitely be a very exciting thing to look out for.

The post Tiluf’s Virtual Teleportation is in internal testing, coming out for the public by the end of October’21 appeared first on Zex PR Wire.

Fashion with passion- by women, and for women

A Cut Above Sage Businessworks, Quickbooks Enterprise Comes Out a Clear Forerunner