Singapore, 7 Sep 2021, ZEXPRWIRE, Testnets are an important aspect of the blockchain deployment and future development. The future of the blockchain depends on how well the testnets are working and what improvements can be made for the mainnet to be executed without faults. These testnets are crucial when it comes to mitigate any faults in the initial testing. CreataChain’s testnet contains fake assets and simulations for experimentation without putting the mainnet at any risk. The testnet that will be launched by CreataChain will allow users and developers to utilize the network’s components without risking any of their funds. 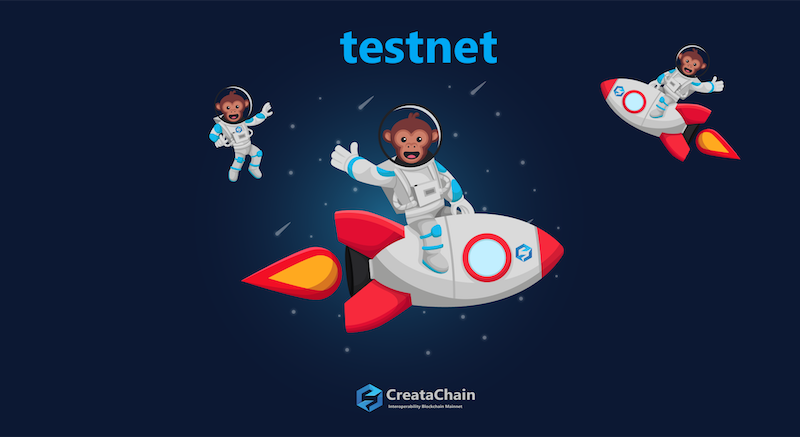 CreataChain is a blockchain achieving highest transaction per second speeds and provides range of functionalities for developers to pick and choose from. It is laying foundation for high scalability and security which is the need of the decentralized economy. Its mission is to become the ultimate architecture for interoperable blockchain that bridges the communication gap between silos of blockchain. CreataChain’s testnet is integral part of the future success of the ecosystem.

The users connected on the testnet network of CreataChain ecosystem should be aware of the many risks that the testnet will pose. It is true, without a doubt, that the state of the blockchain will be reverted at any time after the testing period is complete and enough information for improvement and deployment can be gathered. In the first phase of the testnet, the network is unstable. There are possible rollbacks that users can expect arbitrarily even to the genesis block. The users are able to interoperate and connect with other blockchains with the binding of the smart contracts.

The users are advised against trading in the first phase of the testnet, as the trading transactions can be lost once the state is reverted back. This loss of tokens is a risky business, however, in the second phase the users can safely delegate the native token of CreataChain, CTA, to the validators for validating the data and accepting the proposal. The users will be needing a wallet and it is advised to use more than one addresses to initiate in trading. Users can create testnet wallet and if the tokens are greyed on the wallet it means that the wallet is a testnet wallet. The wallet can be used to trade and to receive fees or rewards for validating the block on the blockchain.

The third phase of the ecosystem deploys the ICP to the smart contracts. Smart contracts are upheld among the usersto implement immutability in the software. The ICP connects independent blockchain with each other using the Augusteum Consensus Core. The exchange of data and transactions take place fairly fast than the mainnet because of the consensus. Augustuem Core is a hybrid consensus between PBFT and DPoS, hence, the scalability and the security is far greater compared to other blockchains. Users can trade many different tokens with one blockchain to another with ICP.

It is dependent upon the developer to use the ICP in the application-specific blockchain or not. CreataChain allows building of many blockchains and all these have different tokens, except that the main Arch Chain uses CTA. Creata SDK allows the users to design and deploy the decentralized applications with any programming language and create any token that suits the overall business plan. Once the users have decided upon what they want their token to be then they can code the contract and test the token on the testnet.

The CreataChain’s testnet is an important tool for the success of the ecosystem. Augusteum Consensus makes it easy to test the speed of the transaction fees and execute them despite being different in size from the mainnet. It allows the users to prepare before the initial launch of the mainnet and helps understand the working of the ecosystem in all seriousness.

Dads Against Deplorables: A 2022 Calendar

Buy Ecopoxy From All American Woodworks In Montana